The long awaited boxing match between Floyd Mayweather Jr. and UFC star Conor McGregor has now been made official and fixed for August 26, 2017 in Las Vegas. Mayweather confirmed the fight on his Instagram account as he shared a video poster of both fighters with the caption, “It’s official”.

Then a few minutes later, McGregor tweeted; ‘the fight is on’ posting a picture of himself next to one of Mayweather’s father Floyd Mayweather Sr. 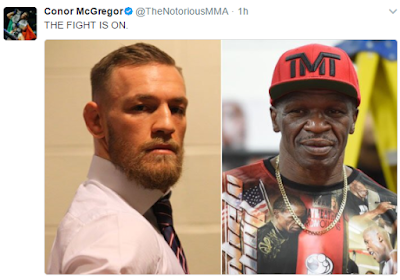 Mayweather, who retired in September 2015 after winning all 49 of his pro fights, will face a mixed martial arts fighter who has never been in a scheduled 12-round fight at the MGM Grand arena.

The fight that will take place in a boxing ring and be governed by boxing rules.

The fight will take place at the T-Mobile Arena, but ticket prices have not been set yet.

Both Floyd and Conor will be tested by USADA for performance enhancing drugs.

Conor is expected to make around $100 million for the fight, he also sincerely believes he will knock Mayweather out.