The role of the media as the fourth estate of the realm in community development and most especially protection of the fabrics of peace in society was the focus at a round table organized by the Ilorin Emirate Descendants Progressive Union (IEDPU) for Broadcast executives operating within Ilorin, the kwara State capital.

Speaking at the meeting the National President of the Union- Alhaji Aliyu Uthman admonished electronic media to maintain the tranquility that Ilorin Emirate is renowned for.

He however observed with dismay that in recent times the peace of the community is becoming violated and threatened by people of questionable character; thereby urging media executives to use their platforms the best way possible in stemming the tide and to ensure that Ilorin retains its unique selling point as the “state of harmony”. Alhaji Aliyu also advised that more airtime be given to security agencies in the state to enlightened members of the public on what they should do for them to enjoy maximum protection even as the 2023 general election draws closer. 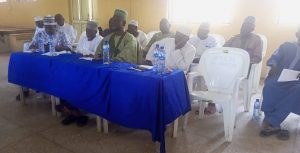 In reaction, media executives present unanimously appreciated the round table session and called on IEDPU as a Union to accord them more support for a more peaceful kwara.

IEDPU as a union was formed in 1941 and has its members and executive members spread across the five Local Government Areas of the Emirate with branches all over the world.