At least 141 people were missing, the People’s Daily said, citing a Maoxian government spokesman hours after the 6:00 am landslide.

Rescuers have recovered at least five bodies after a massive landslide buried a village in southwest China on Saturday, an official said, as state media said over 120 people remained missing.

Wu Xiaobin, the captain of the local fire department, confirmed the first deaths to state broadcaster CCTV hours after the avalanche of rock hit the village of Xinmo in Sichuan province. 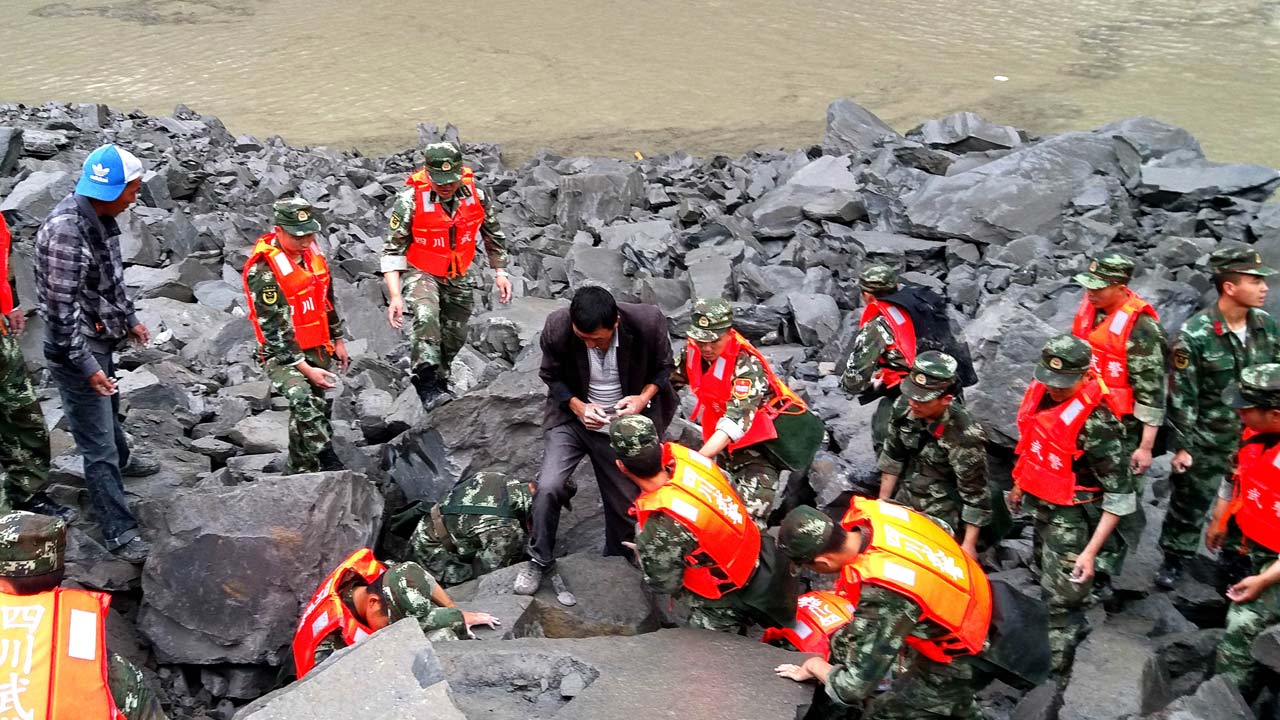 Chinese military police and rescue workers are seen at the site of a landslide in in Xinmo village, Diexi town of Maoxian county, Sichuan province on June 24, 2017. Around 100 people are feared buried after a landslide smashed through their village in southwest China’s Sichuan Province early Saturday, local officials said, as they launched an emergency rescue operation.STR / AFP

Chinese rescuers scoured through rocks on Saturday in a frantic search for more than 120 people feared buried after the landslide smashed through a mountain village in southwest Sichuan province.

A couple and a baby were rescued and taken to hospital after 46 homes in the village of Xinmo were swallowed by huge boulders when the side of a mountain collapsed, according to the local Maoxian, or Mao county, government.
A fourth survivor was found but rescuers were still trying to get to him. The landslide blocked a two-kilometre (one-mile) stretch of river and 1.6 kilometre of road.

Rescuers used ropes to move a massive rock while dozens of others, aided by dogs, searched the rubble for survivors, according to videos posted online by the Maoxian government and state broadcaster CCTV.

Bulldozers and heavy diggers were also deployed to remove boulders, the images showed. Medics were seen treating a woman on a road. Hundreds of police, military and firefighters were taking part in the rescue.

Wang Yongbo, one of the officials in charge of rescue efforts, said the vital signs of one of the survivors “are weak”.

“It’s the biggest landslide in this area since the Wenchuan earthquake,” he said, referring to the disaster that killed 87,000 people in 2008 in a town in Sichuan.

Local police captain Chen Tiebo said the heavy rains that hit the region in recent days had triggered the landslide.

“There are several tonnes of rock” over the village, he told the state broadcaster CCTV.

“It’s a seismic area here. There’s not a lot of vegetation,” Chen said.

Igbo quit notice: No cause for alarm, says military

Drama in Rivers as armed robbery suspects refuse to be paraded