According to a statement released by the state’s internal revenue service this morning, the tax certificates of Ikpeazu are not fake and were duly issued by them. 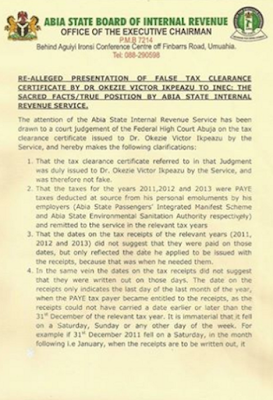 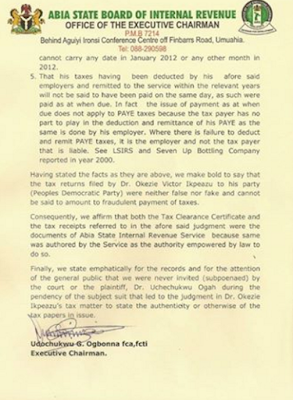 This statement is coming after an High court in Abuja had ordered Ikpeazu to vacate his office after his opponent in the state’s PDP overnorship primaries, Uche Ogar, proved to the court that Ikpeazu tendered fake tax credentials to their party.

The statement released by the Abia state internal revenue and signed by its chairman, Udochukwu G. Ogbonna, reads;

The attention of the Abia State Internal Revenue Service has been drawn to a court judgement of the Federal High Court Abuja on the tax clearance certificate issued to Dr. Okezie Victor Ikpeazu by the Service, and hereby makes the following clarifications:

1. That the tax clearance certificate referred to in that Judgment was duly issued to Dr. Okezie Victor Ikpeazu by the Service, and was therefore not fake.
2. That the taxes for the years 2011,2012 and 2013 were PAYE taxes deducted at source from his personal emoluments by his employers (Abia State Passengers’ Integrated Manifest Scheme and Abia State Environmental Sanitation Authority respectively) and remitted to the service in the relevant tax years
3. That the dates on the tax receipts of the relevant years (2011, 2012 and 2013) did not suggest that they were paid on those dates, but only reflected the date he applied to be issued with the receipts, because that was when he needed them.
4. In the same vein the dates on the tax receipts did not suggest that they were written out on those days. The date on the receipts only indicates the last day of the last month of the year, when the PAYE tax payer became entitled to the receipts, as the receipts could not have carried a date earlier or later than the 31st December of the relevant tax year. It is immaterial that it fell on aSaturday, Sunday or any other day of the week. For example if 31st December 2011 fell on aSaturday, in the month following i.e January, when the receipts are to be written out, it cannot carry any date in January 2012 or any other month in 2012.
5. That his taxes having been deducted by his afore said employers and remitted to the service within the relevant years will not be said to have been paid on the same day, as such were paid as at when due. In fact the issue of payment as at when due does not apply to PAYE taxes because the tax payer has no part to play in the deduction and remittance of his PAYE as the same is done by his employer. Where there is failure to deduct and remit PAYE taxes, it is the employer and not the tax payer that is liable. See LSIRS and Seven Up Bottling Company reported in year 2000.
Having stated the facts as they are above, we make bold to say that the tax returns filed by Dr. Okezie Victor Ikpeazu to his party (Peoples Democratic Party) were neither false nor fake and cannot be said to amount to fraudulent payment of taxes.
Consequently, we affirm that both the Tax Clearance Certificate and the tax receipts referred to in the afore said judgment were the documents of Abia State Internal Revenue Service because same was authored by the Service as the authority empowered by law to do so.
Finally, we state emphatically for the records and for the attention of the general public that we were never invited (subpoenaed) by the court or the plaintiff, Dr. Uchechukwu Ogah during the pendency of the subject suit that led to the judgment in Dr. Okezie Ikpeazu’s tax matter to state the authenticity or otherwise of the tax papers in issue.
Udochukwu G. Ogbonna
Executive Chairman.

Sen. Stella Oduah refutes report that N2.5bn was found in account owned by her housemaid