Aged pensioners in their hundreds on Wednesday marched on the streets of Ilorin, the Kwara state capital in demand for the payment of their long-held pension arrears and gratuities owed by the administration of Bukola Saraki who served as Governor of the state from 2003 to 2011.

Led by their executives, the concerned pensioners marched from the state secretariat of the Nigeria Union of Pensioners, NUP, Commissioners lodge way to the Government House, chanting solidarity songs.

The old men and women who worked for the state from 1976 to 1999 also displayed placards with various inscriptions such as “Pensions and Gratuities are rights, not gift to pensioners from government,” “Onnoghen has paid the supreme price of injustice,” “Help us collect our pension from Eleyinmi Bikola Saraki,” Era of Bukola Saraki is over in Kwara state. He should be prosecuted,” and many more.

While addressing press men at the Government House, the General Secretary, Comrade Bamidele Ajibola, said the 9,030 accredited pensioners have only received N1.68 billion representing 50% of their N3.3 billion entitlement despite securing a bank loan to that effect.

Ajibola said: “It would be recalled that the Kwara State Government under the leadership of Bukola Saraki agreed in 2008 to pay our outstanding pension arrears and gratuities (Owo Arugbo).

“The deserving recipients are made up of 9, 030 accredited pensioners. 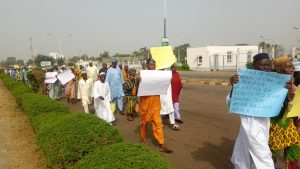 “The government announced that it would require N3.3bn to defray the entire sum and approached some banks for a loan of N3.3bn which was indeed approved and collected, only to turn their back at us by paying N1.68bn, representing 50% of the total sum and claimed that the remaining 50% will be used to develop infrastructures in the state.”

The Concerned Pensioners Secretary expressed sadness that despite their efforts since September 2014 to get the Economic and Financial Crimes Commission, EFCC, to investigate their petition, there was no positive resut. 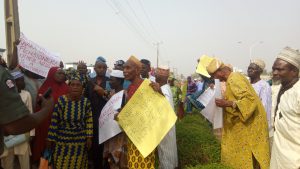 Ajibola who described the state retirees as the original aged people in the state, said it is unfortunate that the former Senate President is being emotional over the fate of the demolished Ile-Arugbo, while withholding the entitlement of those who spent the better part of their lives to work for the development of the state.

“According to him, if Bukola Saraki can claim to have built ‘Ile Arugbo’ for peoplewho have contributed nothing to the development of the state, why then would he withhold ‘Owo Arugbo,’ money meant for people who have used the better part of their meaningful lives to immensely develop the state.”

The concerned pensioners therefore appealed to the incumbent Governor, Abdulrasaq Abdulrahman to come to their aid, and ensure the speedy payment of their pension arrears in order for the aged people to earn a living and take care of their ailing health.

Women in positions of authority charged to use...

I have no hotel in Lagos – Governor...