The Federal government has summoned the Indian High Commissioner to Nigeria, Ambassador Nagabashana Reddy, over the recent attacks on Nigerian students studying in the countrty. The Federal Government urged the Indian government to arrest and prosecute those responsible for attacks on Nigerian students in the country.

The permanent secretary of the Ministry of Foreign Affairs, Olushola Enikanolaiye who called for the meeting meeting with Nagabushana Reddy, Indian high commissioner to Nigeria on Wednesday, expressed displeasure over the recent attacks.

He said; “This is not the first time this would happened; Nigerians have suffered similar attack in the past; so, what we will like to see on this occasion is that the perpetrator should be arrested.

“It is therefore, a concern to us that Nigerian students in that place were harassed, beaten up and many of them were seriously injured,”.

“We think this should not have happened considering the excellent relationship between two of us — the two countries have things in common and have been great friends.”

“That is why we felt we should register our concern to you on this occasion, and to please ask your government to take effective measures that this does not occur again.” 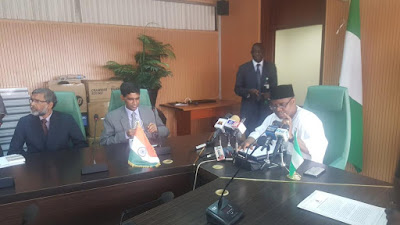 The Indian High Commissioner apologised for the attacks and said that the Indian government have taken concrete steps to address the incident and also promised that those who perpetrated the act would be made to face the law.

Abacha loot is media creation, he deposited those...