The soldiers were sentenced to life imprisonment, but their jail sentence was commuted to 10 years under the current administration. 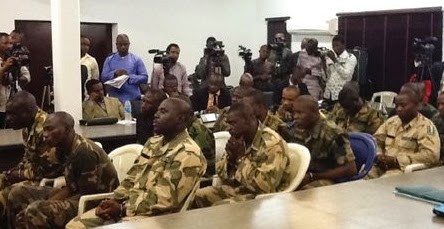 The letter read; “We are counsel to the 70 soldiers who are currently held in custody at the Ikoyi and Kirikiri Prisons in Lagos state,”.

“We have the instructions of our clients to write this letter of appeal to Your Excellency.

“Our clients were charged with mutiny before courts-martial for demanding for weapons to fight the well-equipped insurgents in the north east zone. In a bid to divert the attention of the public from the criminal diversion of the huge fund earmarked for procurement of arms and ammunition to fight the terrorists our clients were convicted and sentenced to death by the courts-martial which tried them in 2014.

“Although based on our appeal the authorities of the Nigerian Army have commuted the death sentences passed on the soldiers to 10 years imprisonment, we are compelled to urge Your Excellency to grant them pardon.”

“The courts-martial which tried our clients deliberately failed to take cognizance of section 179 of the Armed Forces Act which permits ‘a soldier, rating or aircraftman to make a complaint to his commanding office and that he shall not be penalised for having made a complaint,”.

“The Arms Procurement Panel set up by Your Excellency has confirmed that the huge fund earmarked for the purchase of arms and ammunition was criminally diverted by former services chiefs and other senior military officers.

“The indicted military officers are currently being prosecuted by the Economic and Financial Crimes Commission for unlawful enrichment and criminal diversion of public funds.

“In Oladele & Ors. v. Nigerian Army (2003) 36 WRN 48 the Appellants (23 soldiers) who were charged with mutiny and allied offences were convicted and sentenced to life imprisonment for protesting at the Cairo airport, Egypt over the non-payment of medical allowances. In setting aside the conviction and the sentences the Court of Appeal held inter alia.

“Since the demand of the convicted soldiers and others for weapons found justification in the criminal diversion of the huge fund provided for the purchase of arms and armament to fight the terrorists there was no legal and moral justification for the conviction and sentences imposed on them by the courts-martial.

“Since the demand for weapons to carry out counter-insurgency operations in the north east zone was legitimately made by our clients under the Armed Forces Act, we urge Your Excellency to grant them pardon pursuant to Section 175 of the Constitution of the Federal Republic of Nigeria, 1999 as amended.”

Indonesia announces new visa policy for Nigerians and others