Cristiano Ronaldo has been handed a five-game suspension after pushing the referee in Real Madrid’s 3-1 win over Barcelona. 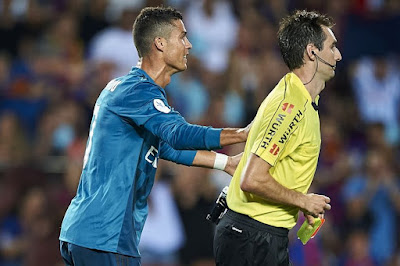 The Portuguese has been given one game for the initial red card and four more for the subsequent physical altercation. A €3000 (£2727) fine has been added on top of the suspension.

Any appeal will have to wait until Wednesday, the day of the second leg of the Super Copa at the Bernabeu, because of a public holiday on Tuesday.

Portugal captain Ronaldo received two bookings in the space of three minutes. An additional mandatory €800 fine has been handed to Ronaldo for the red card, with the club billed for €350.

Ronaldo will return for Real Madrid on September 19 against Real Betis.

We are ready to reclaim south-west – PDP