The former world heavyweight champion tested positive for a banned steroid in February 2015, but blamed the result on eating uncastrated wild boar.

His victory over Wladimir Klitschko in 2015 was his last fight before beginning his legal battle with UK Anti-Doping (Ukad).

He will be free to return to the ring once he regains his boxing licence from the British Boxing Board of Control (BBBofC), who Ukad say have accepted the outcome.

However, Ukad chief executive Nicole Sapstead insisted there was “absolutely no whitewash and nothing to be fearful or embarrassed about” in the decision.

She said the anti-doping agency had been “completely transparent” and that the developments represented a “good outcome”, given their conviction that a doping violation did take place.

A Ukad statement read: “In recognition of the retrospective counter-arguments and the risks inherent in the dispute resolution process, each side has accepted a compromise of its position.” 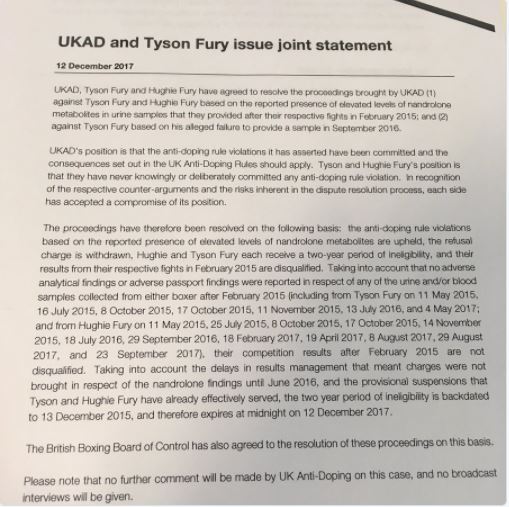 The Court of Appeal’s ruling has vindicated me, says Senate president, Bukola Saraki

Estate Surveyor slumps, dies while delivering speech at an ICPC event in Abuja