Governor Rauf Aregbesola of Osun state, has sworn in his cabinet, with less than two years left in his tenure, The Cable reports. Aregbesola‎, speaking at the swearing-in ceremony which took place at the government house in Osogbo, the state capital, said the inauguration was long overdue.

He said; “I congratulate all the appointees for being considered worthy of service to the government and people of our dear state and for scaling the hurdle of screening,” .

“Many of you served in the first term; the rest are fresh hands. Of course, this is long overdue. It should have come up immediately after my inauguration on November 27, 2014. As you all know, we were hamstrung by dire constraint – principally financial.

“Our second term coincided with the onset of a national economic disaster. The first on account of a purported daily theft of 650,000 barrels of crude oil under the watch of the immediate past PDP national government. This is curious and improbable.

“Indeed, 27 states and the federal government were unable to pay salaries of workers. It might interest us to know that the government of Goodluck Jonathan‎, according to his finance minister, Dr. Ngozi Okonjo-Iweala, had to borrow N476 billion from commercial banks to be able to pay salaries in the last four months of his administration.”

The attorney-general and commissioner of justice, Surajudeen Bashir, spoke on behalf of his colleagues. 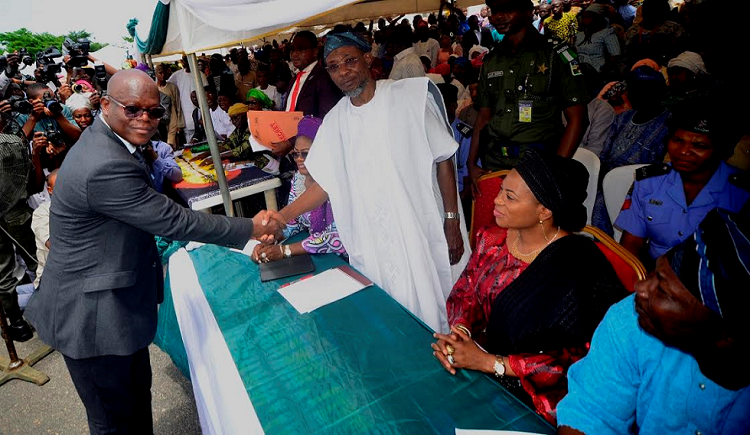 He said; “This delay, it shows the courage, commitment and doggedness of this administration in managing the limited resources,” .

“Though this would have been done, but with the economic prowess of Mr. Governor in meeting the demands and needs of the people of the state, it was delayed.

“So, the formation of this cabinet shows the commitment and courage of this government despite the economic recession.

“It also shows the doggedness and commitment of the present administration led by Governor Aregbesola to weather the storm.

“But the remaining 18 months to the expiration of this administration is enough to galvanise development.”