The world football governing body, FIFA, has ordered a World Cup qualifier clash between South Africa and Senegal to be replayed after a Ghanaian referee who has been banned for life manipulated the match. 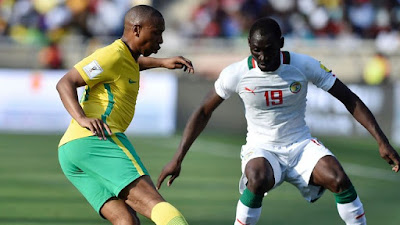 Ghanaian referee Joseph Lamptey awarded a penalty for a nonexistent handball in the previous game which was played on the 12th of November, 2016 which South Africa won 2-1 and was subsequently banned for life for match manipulation by FIFA in March.

African soccer’s governing body (CAF) in a report said that Lamptey was guilty of poor performance in the match and awarded a wrong penalty for handball despite the fact that the ball never touched the hand of the player.

In a statement issued by a FIFA spokesman, he said: “The Bureau for the Fifa World Cup Qualifiers ordered a replay of the qualification match between South Africa and Senegal held on 12 November 2016.

“The match will be replayed within the November 2017 international window, with the exact date to be confirmed in due course.

“As stated in the Fifa World Cup regulations, this decision shall come into effect immediately, but shall be subject to confirmation by the Organising Committee for Fifa Competitions at its next meeting, scheduled for 14 September.”

This decision comes after the life ban imposed by the FIFA Disciplinary and Appeal Committees on Joseph Lamptey was recently upheld by the Swiss-based Court of Arbitration for Sport (CAS).

Pa Adebayo Faleti to be buried on Friday